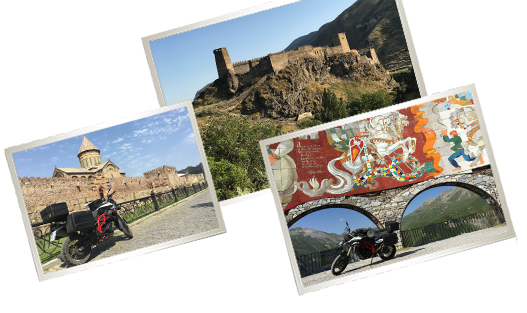 Location: Southwestern Asia, bordering the Black Sea, between Turkey and Russia, with a sliver of land north of the Caucasus extending into Europe; note - Georgia views itself as part of Europe

The region of present day Georgia contained the ancient kingdoms of Colchis and Kartli-Iberia. The area came under Roman influence in the first centuries A.D., and Christianity became the state religion in the 330s. Domination by Persians, Arabs, and Turks was followed by a Georgian golden age (11th-13th centuries) that was cut short by the Mongol invasion of 1236. Subsequently, the Ottoman and Persian empires competed for influence in the region. Georgia was absorbed into the Russian Empire in the 19th century. Independent for three years (1918-1921) following the Russian revolution, it was forcibly incorporated into the USSR in 1921 and regained its independence when the Soviet Union dissolved in 1991.

Mounting public discontent over rampant corruption and ineffective government services, followed by an attempt by the incumbent Georgian Government to manipulate parliamentary elections in November 2003, touched off widespread protests that led to the resignation of Eduard SHEVARDNADZE, president since 1995. In the aftermath of that popular movement, which became known as the "Rose Revolution," new elections in early 2004 swept Mikheil SAAKASHVILI into power along with his United National Movement (UNM) party. Progress on market reforms and democratization has been made in the years since independence, but this progress has been complicated by Russian assistance and support to the separatist regions of Abkhazia and South Ossetia. Periodic flare-ups in tension and violence culminated in a five-day conflict in August 2008 between Russia and Georgia, including the invasion of large portions of undisputed Georgian territory. Russian troops pledged to pull back from most occupied Georgian territory, but in late August 2008 Russia unilaterally recognized the independence of Abkhazia and South Ossetia, and Russian military forces remain in those regions.

Billionaire philanthropist Bidzina IVANISHVILI's unexpected entry into politics in October 2011 brought the divided opposition together under his Georgian Dream coalition, which won a majority of seats in the October 2012 parliamentary elections and removed UNM from power. Conceding defeat, SAAKASHVILI named IVANISHVILI as prime minister and allowed Georgian Dream to create a new government. Georgian Dream's Giorgi MARGVELASHVILI was inaugurated as president on 17 November 2013, ending a tense year of power-sharing between SAAKASHVILI and IVANISHVILI. IVANISHVILI voluntarily resigned from office after the presidential succession, and Georgia's legislature on 20 November 2013 confirmed Irakli GARIBASHVILI as his replacement. These changes in leadership represent unique examples of a former Soviet state that emerged to conduct democratic and peaceful government transitions of power. Popular and government support for integration with the West is high in Georgia. Joining the EU and NATO are among the country's top foreign policy goals.

Georgia's main economic activities include cultivation of agricultural products such as grapes, citrus fruits, and hazelnuts; mining of manganese, copper, and gold; and producing alcoholic and nonalcoholic beverages, metals, machinery, and chemicals in small-scale industries. The country imports nearly all of its needed supplies of natural gas and oil products. It has sizeable hydropower capacity that now provides most of its energy needs.

Georgia has overcome the chronic energy shortages and gas supply interruptions of the past by renovating hydropower plants and by increasingly relying on natural gas imports from Azerbaijan instead of from Russia. Construction of the Baku-T'bilisi-Ceyhan oil pipeline, the South Caucasus gas pipeline, and the Kars-Akhalkalaki railroad are part of a strategy to capitalize on Georgia's strategic location between Europe and Asia and develop its role as a transit point for gas, oil, and other goods. The expansion of the South Caucasus pipeline, as part of the Shah Deniz II Southern Gas Corridor project, will result in a $2 billion foreign investment in Georgia, the largest ever in the country. Gas from Shah Deniz II is expected to begin flowing in 2019.

Georgia's economy sustained GDP growth of more than 10% in 2006-07, based on strong inflows of foreign investment and robust government spending. However, GDP growth slowed following the August 2008 conflict with Russia, and sunk to negative 4% in 2009 as foreign direct investment and workers' remittances declined in the wake of the global financial crisis. The economy rebounded in 2010-13, but FDI inflows, the engine of Georgian economic growth prior to the 2008 conflict, have not recovered fully. Unemployment has also remained high.

The country is pinning its hopes for renewed growth on a determined effort to continue to liberalize the economy by reducing regulation, taxes, and corruption in order to attract foreign investment, with a focus on hydropower, agriculture, tourism, and textiles production. Georgia has historically suffered from a chronic failure to collect tax revenues; however, since 2004 the government has simplified the tax code, improved tax administration, increased tax enforcement, and cracked down on petty corruption, leading to higher revenues. The government has received high marks from the World Bank for its anti-corruption efforts. Since 2012, the Georgian Dream-led government has continued the previous administration's low-regulation, low-tax, free market policies, while modestly increasing social spending, strengthening anti-trust policy, and amending the labor code to comply with International Labor Standards. The government published its 2020 Economic Development Strategy in early 2014 and former Prime Minister Bidzina IVANISHVILI launched the Georgian Co-Investment Fund, a $6 billion private equity fund that will invest in tourism, agriculture, logistics, energy, infrastructure, and manufacturing. In mid-2014, Georgia signed an association agreement with the EU, paving the way to free trade and visa-free travel

white rectangle with a central red cross extending to all four sides of the flag; each of the four quadrants displays a small red bolnur-katskhuri cross; sometimes referred to as the Five-Cross Flag; although adopted as the official Georgian flag in 2004, the five-cross design appears to date back to the 14th century