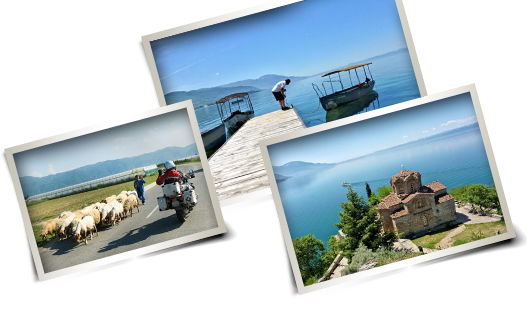 Mountainous territory covered with deep basins and valleys; three large lakes, each divided by a frontier line; country bisected by the Vardar River

Macedonia gained its independence peacefully from Yugoslavia in 1991. Greece's objection to the new state's use of what it considered a Hellenic name and symbols delayed international recognition, which occurred under the provisional designation of "the Former Yugoslav Republic of Macedonia." In 1995, Greece lifted a 20-month trade embargo and the two countries agreed to normalize relations, but the issue of the name remained unresolved and negotiations for a solution are ongoing. Since 2004, the United States and 133 other nations have recognized Macedonia by its constitutional name, Republic of Macedonia. Some ethnic Albanians, angered by perceived political and economic inequities, launched an insurgency in 2001 that eventually won the support of the majority of Macedonia's ethnic Albanian population and led to the internationally-brokered Ohrid Framework Agreement, which ended the fighting and established guidelines for the creation of new laws that enhanced the rights of minorities. Fully implementing the Framework Agreement, maintaining momentum on democratic reforms, and stimulating economic growth and development continue to be challenges for Macedonia, although progress has been made over the past several years.

Macedonia is vulnerable to economic developments in Europe - due to strong banking and trade ties - and dependent on regional integration and progress toward EU membership for continued economic growth. At independence in September 1991, Macedonia was the least developed of the Yugoslav republics, producing a mere 5% of the total federal output of goods and services. The collapse of the Socialist Federal Republic of Yugoslavia ended transfer payments from the central government and eliminated advantages from inclusion in a de facto free trade area. An absence of infrastructure, UN sanctions on the downsized Yugoslavia, and a Greek economic embargo over a dispute about the country's constitutional name and flag hindered economic growth until 1996. Since then, Macedonia has maintained macroeconomic stability with low inflation, but it has so far lagged the region in attracting foreign investment and creating jobs, despite making extensive fiscal and business sector reforms. Official unemployment remains high at more than 31%, but may be overstated based on the existence of an extensive gray market, estimated to be between 20% and 45% of GDP, which is not captured by official statistics. In the wake of the global economic downturn, Macedonia has experienced decreased foreign direct investment, lowered credit availability, and a large trade deficit. However, as a result of conservative fiscal policies and a sound financial system, in 2010 the country credit rating improved slightly to BB+ and was kept at that level in 2011-12. Macroeconomic stability has been maintained by a prudent monetary policy, which keeps the domestic currency pegged against the euro. As a result, GDP growth was modest, but positive, from 2010 to 2012, and inflation was under control.

A yellow sun (the Sun of Liberty) with eight broadening rays extending to the edges of the red field; the red and yellow colors have long been associated with Macedonia.